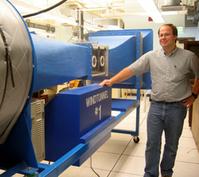 Mike Logan went off to college and never looked back. Originally from Marion, Indiana, Mike came to Purdue to study Wildlife Biology. Upon graduating in 1997, he decided to stick around for a while longer to study Electrical Engineering. Mike earned his second degree in May 2005. While studying at Purdue, Mike worked for Purdue's Botany Pathology Department for two years. He gained valuable Biology experience while doing genetics research on fungus. Mike expanded his knowledge of Wildlife Biology by working for 3-D Environmental surveying populations of endangered species of bats. The results of Mike's work were then used by the United States Army in their base re-alignment and closure process.

For the last six years, Mike's work has focused on his electrical knowledge rather than biological. A Computer/Electronics Systems Manager at ECN, Mike is also the Mechanical Engineering Site Specialist and the Interim Supervisor for ME's Electrical shop. Mike is the principle liaison between ME and ECN and is responsible for advising the school on computer issues. He is also responsible for maintaining all of the computers in Mechanical Engineering, including all faculty offices, graduate offices, research laboratories, and undergraduate laboratories. Mike has been involved with a number of special projects, ranging from deploying departmental firewalls in ME to advising ME seniors on design/assembly for their senior design projects.

Although Mike now spends his work days in front of a computer screen, nature still plays an important role in his life outside the office. An avid scuba diver for the past six years, Mike is skilled in technical diving and cave diving and is the advisor to the Purdue Scuba Club. He is also experienced in wreck-diving and has even assisted with scuba diving certifications. Scuba diving has taken Mike across the country, from the North Florida cave system to the Great Lakes. So far Mike has visited every state East of the Mississippi. He is now heading West in his travels. Mike's traveling partner is his wife, Rachel. They met while they were both working in the same area at Purdue. Rachel is now a PhD student in ME. Since getting married on September 4, 2004, the couple bought a new house in Lafayette. Mike now spends much of his free time working around the house. He has recently taken interest in basic machining, one of his first projects being a set of underwater diving lights he designed and built completely from scratch. Although Mike is currently involved with a number of exciting hobbies, he hopes to expand his repertoire to include skydiving and hang gliding in the near future.

Server: zeoclient-03
Generation took 0.08 seconds
Copyright © 2020, Purdue University, all rights reserved.
An equal access/equal opportunity university.
If you have trouble accessing this page because of a disability, please contact the Webmaster at webmaster@ecn.purdue.edu.
Why secure web services?