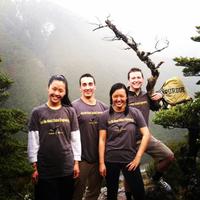 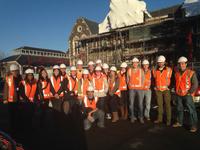 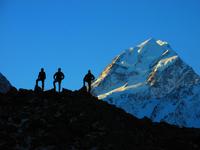 A group of 18 Purdue students traveled to Christchurch, New Zealand May 23rd through June 1st for the study abroad portion of a CE course on earthquake engineering.

A group of 18 Purdue students traveled to Christchurch, New Zealand May 23rd through June 1st for the study abroad portion of a CE course on earthquake engineering. The team was led by Ayhan Irfanoglu, Associate Professor of Civil Engineering, and Jill Churchill from the Global Engineering Program at Purdue. The University of Canterbury at Christchurch served as the host institute.

The location was unique in the sense that the city of Christchurch (pop. ~400K) is still trying to recover from a series of earthquakes that shook the city and surrounding area between September 2010 and December 2011. The devastating blow came on February 22, 2011 when a magnitude 6.3 earthquake hit the city during lunch time. It killed 185 people, caused nearly $40B of losses (with nearly 70% of the central business district damaged and to be demolished), and resulted in large areas of town being abandoned due to liquefaction induced settlement (the widest native soil liquefaction observed in modern history).

On the technical side, the group toured Christchurch and visited the town of Lyttelton, epicenter of the February 2011 earthquake. They viewed the devastation to the built environment in greater Christchurch and Canterbury region, and listened to testimonies at the Quake City Museum. The group had an ICOMOS-NZ Chair guided tour of the 19th century Canterbury Provincial Government Buildings (currently stabilized and preserved for the next generation to find out what they want to do as the funds fell short to retrofit them fully), and a lead-structural engineer guided tour of the 19th-20th century Arts Centre - the original site of the University of Canterbury, and where Rutherford developed his theory of the atom - undergoing $290M retrofit and restoration. Other tours of retrofit sites on campus included the Civil Engineering building, the so-called transitional Cardboard Cathedral (with an expected lifespan of 50 years), and the Cashell Mall Re:Start, the main shopping mall made creatively out of shipping containers. They also toured the civil engineering laboratories at the University of Canterbury.

In addition to the tours, the students were able to experience a number of engaging lectures given by Canterbury faculty, engineers (including three engineers from the Christchurch office of Thornton Tomasetti), and experts in seismology, structural and geotechnical earthquake engineering, civil defense and emergency response, recovery planning and field-application, and sociology.

Cultural events included a day trip to the coastal town of Akaroa (at the core of a long-extinct volcano), Okains Bay, and Arthur’s Pass National Park in the Southern Alps. The team unwound during a fun-filled improvisational comedy show “Scared Scriptless,” where one student from the group was brought on stage to assist in the performance.  The trip concluded with a farewell dinner followed by a performance of Shakespeare’s A Midsummer Night’s Dream. The show and the play were at the temporary hangar-like site of the Court Theatre, originally located in the Arts Centre the group had toured earlier. It was a pleasant surprise to find out the set, sound, and costume designers of the play were all Boilermakers, and a toast was raised to Purdue during the reception on the other side of the world!

The group was truly able to see a lot, learn a lot, and have a great time on the South Island of New Zealand. A summary of the trip from one of the students states:

“It was truly once in a lifetime, and I will never forget the experiences I had and all of the amazing sites I saw.  I really hope that this course continues because I thought it was the perfect balance between lectures that kept me interested and taught me so much, and tourism throughout the Christchurch area.  I had so many stories and experiences to tell people about when I came home.  I have never seen, in person, the results of a natural disaster such as this, and I have never seen so much civil engineering work in one place to rebuild a city.  The work that the civil engineers are doing in Christchurch have made me so proud to one day play such a crucial role in society like them, and be so involved in the community.”