ABE, along with Biological Sciences, hosted our final 2019 Versiti Blood Drive on November 5. We were able to collect 16 units, bringing our 2019 grand total to 123! Thank you for your faithful participation. Our 2020 dates are: Thursday, January 16; Wednesday, March 25; Thursday, May 28; Thursday, August 20; and Tuesday, November 3. If you have a favorite appointment time, please let Carol Weaver know and she will book those ahead for you. 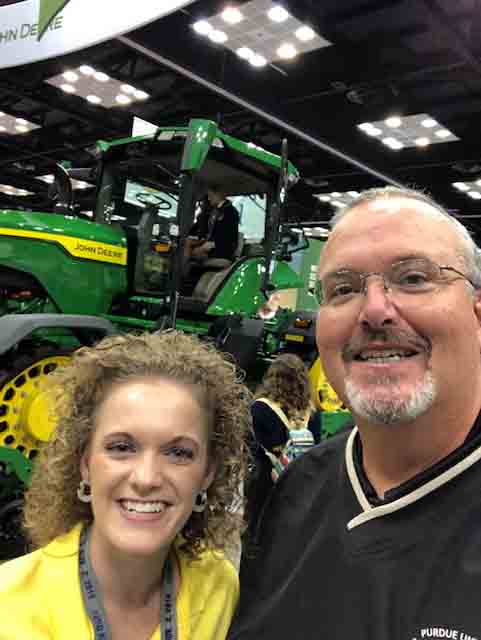 The National FFA Convention was held in Indianapolis ten days ago and Dan Taylor got to visit with alumni - including Alacyn Cox (AE '17)! 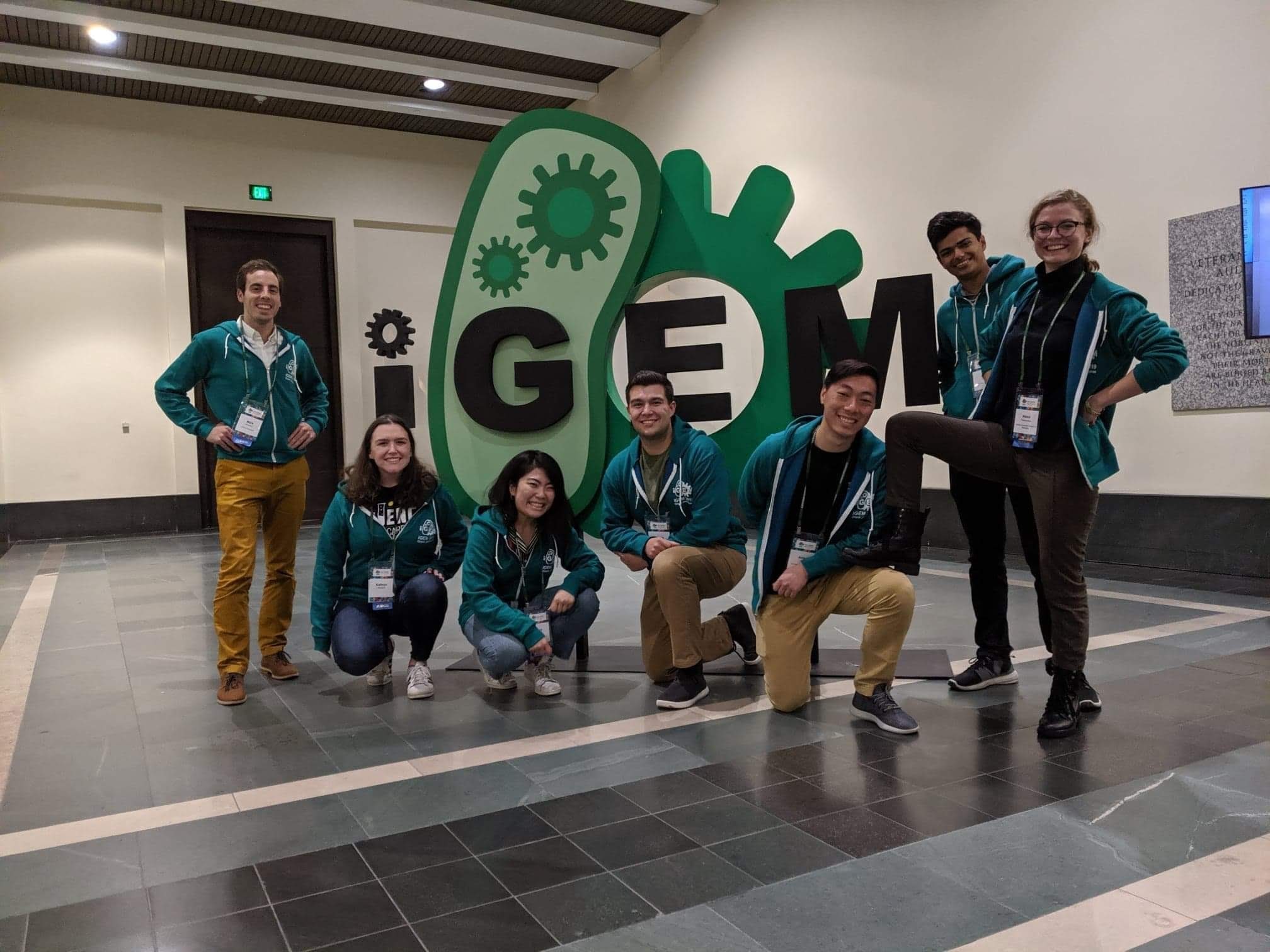 The iGEM Giant Jamboree was held last week and we had a number of Purdue iGEM alum serving as judges this time. Katie Atherton (BE '19), Lexi Petrucciani (BE '18), Suraj Mohan (BE '18), and Mark Aronson (BE '17) returned to Boston to judge inspiring synthetic biology projects in addition to reconnecting with ABE faculty Kevin Solomon and Mohit Verma, along with this year's iGEM team.

The first GeoEDF Workshop was held on October 7-8, 2019 in West Lafayette, IN. The workshop was part of Purdue’s $4.5M NSF CSSI Data Framework project, titled “Extensible Geospatial Data Framework Towards FAIR Science”, funded for October 2018 through September 2023. The four Purdue PIs are Carol Song from Advanced Computing, Jian Jin from ABE, Venkatesh Merwade from Civil Engineering and Uris Baldos from Ag Econ. The goal of the project is to develop a data framework to provide seamless connections among platforms, data,and tools, making large scientific and social geospatial datasets directly usable in scientific models and tools through a plug-n-play data connector/processor framework. The workshop attracted attendants from Purdue and 13 other institutes around the country. ABE professor and Dean’s Fellow for Digital Agriculture Dennis Buckmaster attended the workshop as well. The workshop featured project-specific presentations of the overview, the four science driving use cases including ABE’s LeafSpec Crop Sensor, and cyber infrastructure. The workshop provided a venue for stakeholder feedback through facilitated small group discussion of the GeoEDF impact and one on collaboration opportunities. Throughout the workshop, the schedule included several networking opportunities. The Workshop ended with a tour through the Indiana Corn and Soybean Innovation Center and ABE’s newly deployed Hyperspectral Imaging Field Gantry. 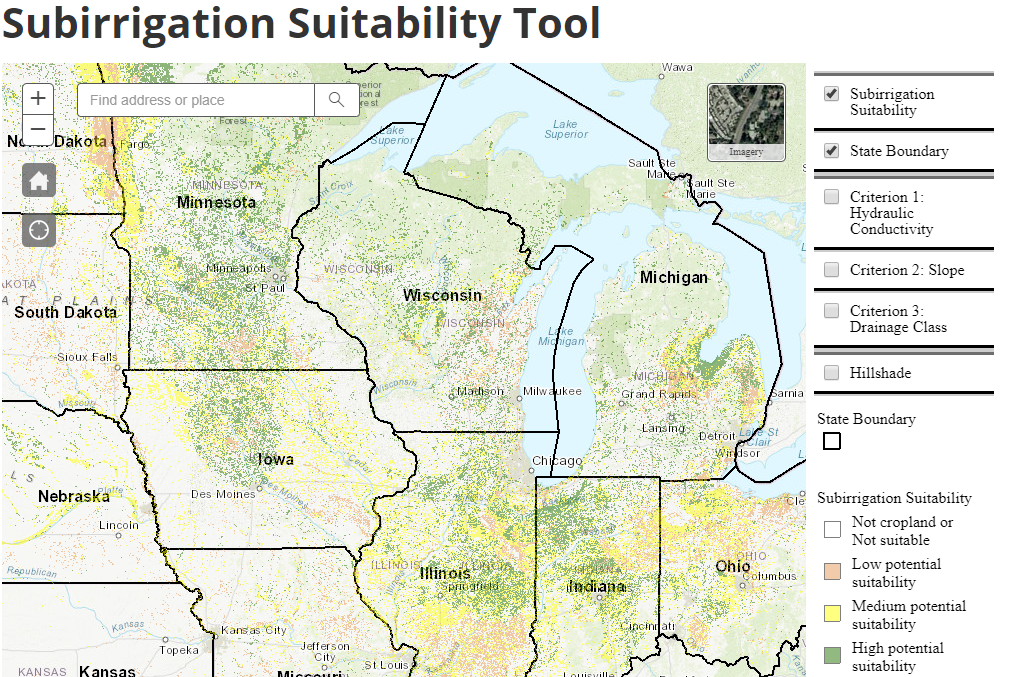 Jane Frankenberger and Ben Reinhart, together with Jason Ackerson in Agronomy, recently released the Subirrigation Suitability Tool (https://transformingdrainage.org/tools/subirrigation-suitability-tool/. providing users with the ability to visualize lands where the practice of subirrigation through subsurface tile drains may have a high probability of success. Subirrigation has the ability to increase crop yields and improve water quality in tile-drained landscapes. Results and map layers from this analysis are also available at https://purr.purdue.edu/publications/3263/1.  The online tool is the latest developed by the USDA-NIFA funded Transforming Drainage project, a collaborative effort aimed at addressing drainage management questions through the assessment and development of new water storage practices and technologies. 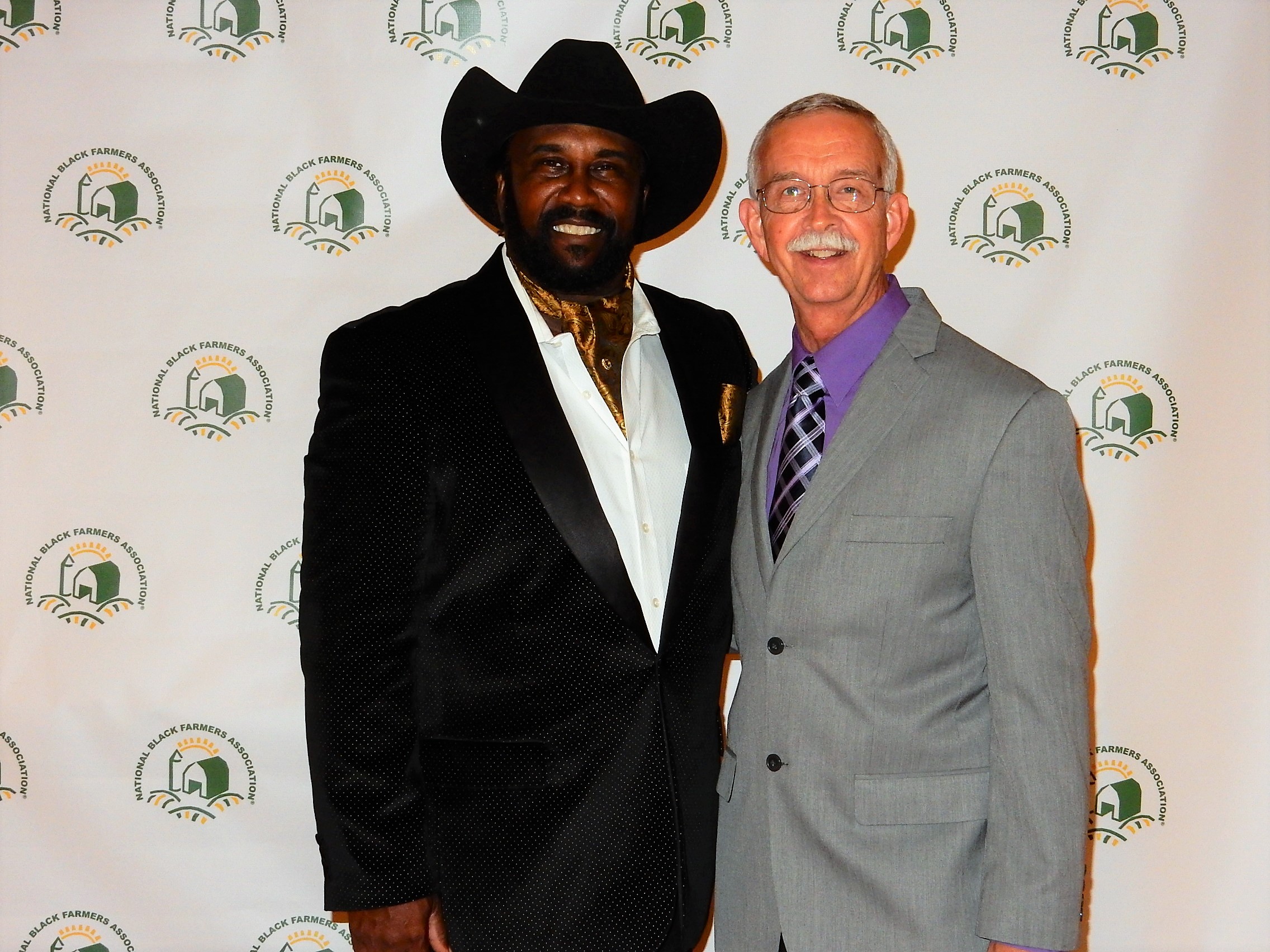 November 1-2, 2019, Chuck Baldwin, National AgrAbility Project’s underserved populations outreach coordinator, participated in the 29th annual conference of the National Black Farmers Association in Prattville, Alabama, as a presenter and exhibitor. More than 500 people, most of them African-American farmers, attended the meetings and festivities.

The theme of the conference was “ReClaiming, ReGaining, and ReGenerating Our Farms”. In addition to a wide variety of speakers from USDA organizations like AgrAbility, FSA, and NRCS, video greetings were conveyed by Secretary of Agriculture Sonny Perdue, and the keynote speaker was Rohan Marley, son of reggae artist and legend, Bob Marley.

Rohan Marley is an entrepreneur and former football player for the University of Miami Hurricanes and the Canadian professional football league. He is the founder (2009) of Marley Coffee, an organic coffee plantation and sustainable farming business. In 2012, Marley founded the “House of Marley”, a range of eco-friendly headphones and stereo speakers which are currently top sellers at such major consumer electronic stores as Best Buy, PC Richards, Verizon, and others. Rohan is also the founder of “Lion Order by Rohan Marley”, a cannabis and CBD line of products to begin distribution in Colorado and eventually other states beginning in 2020.

Chuck Baldwin’s AgrAbility address compared AgrAbility to a good marriage partner for the times in a farmer’s/rancher’s life when things get tough as a result of a disability or functional limitation. He shared that during those times, a partner is needed who gives respect, who will sit down at the kitchen table and listen before speaking, who doesn’t see the person before them as any less capable because they have a limitation, and who believes that by putting their heads together they can come up with solutions that will improve the farmer’s quality of life and keep them doing what they love to do for as long as possible. Baldwin explained how AgrAbility can be that partner. 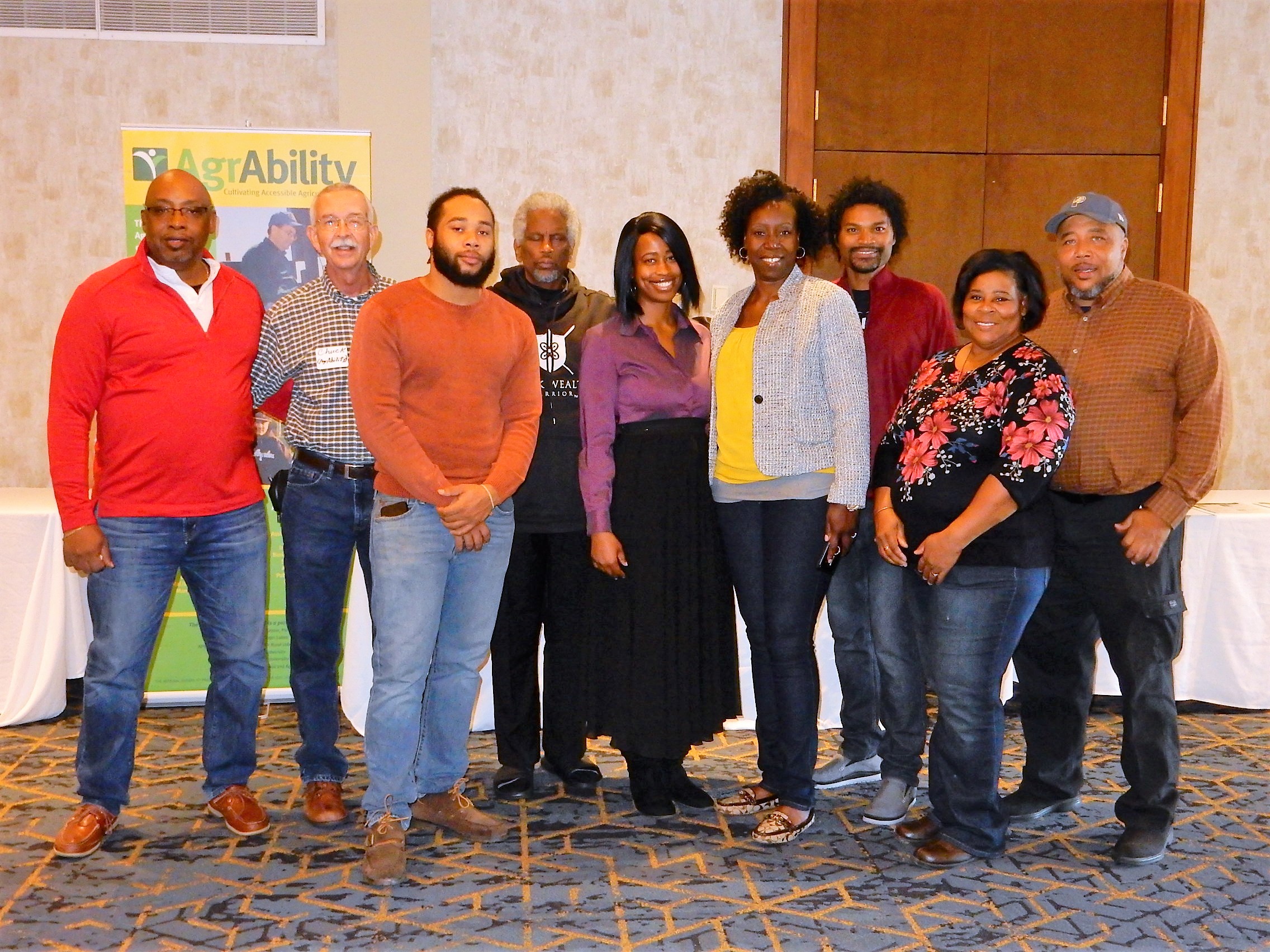 Also attending the NBFA conference were eight members of a group formed by John Jamerson, an African American farmer from Princeton, Indiana, and a member of the historically significant Lyle’s Station group of Black farmers. His group is called Legacy Farming and Health Group, and, along with the Peoples Foundation from California (represented by Ms. Tameka Peoples, founder and president), they are partners with the National AgrAbility Project at Purdue University in a recently-funded Outreach and Assistance for Socially Disadvantaged  Farmers and Ranchers and Veteran Farmers and Ranchers project called LIFE (Legacy Innovation Farming Economics) Project. Chuck was able to meet with these partners for the first time face-to-face to discuss work plans, challenges, and opportunities with the LIFE Project – a definite bonus to all that took place with the NBFA conference.

Indiana AgrAbility attended and exhibited at the Purdue Extension Agriculture and Natural Resources fall retreat held at the Beck Center on the Purdue Agronomy Farm.  The retreat and exhibit provided an opportunity for AgrAbility staff to make contacts with extension educators and educate about AgrAbility services.

The National AgrAbility Project and Purdue health and safety collaborated with various health and safety organizations for a display under the banner of Career Safe at the 2019 National FFA Convention in Indianapolis, Indiana.  Among the collaborators were:  CareerSafe, Progressive Day Camps, Ohio State health and safety program, Agrisafe, the Children’s Center, the Great Plains Center, Central States, and the Grain Handling Safety Coalition.  The attendees (over 65,000 students, FFA advisors, and parents) were provided a scavenger hunt card requiring them to contact each organization in the display area.  Upon completion, they were awarded a safety T-shirt.  Three thousand T-shirts were passed out after a day and a half of the show.  A lot of materials were distributed and over 200 agricultural youth safety curriculums were distributed to FFA advisors and teachers. 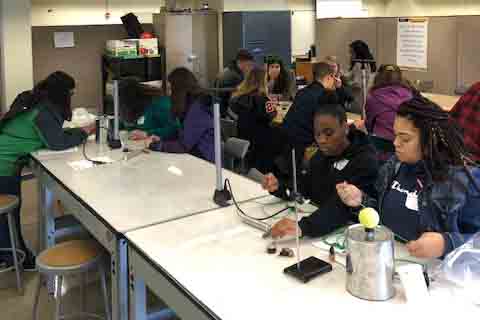 The Council for Agricultural Research, Extension, and Teaching (CARET) is a national grassroots organization. The mission is to enhance national support and understanding of land-grand university systems' food and agricultural research, extension, and teaching programs. The Purdue branch, PCARET, provides a means for Indiana citizens to have input into program development, budgetary matters, and legislation. Members work with decision-makers at all levels - local, state, and national. During the November 7 visit to the West Lafayette campus, members brought students from their county with them, giving the students the chance to visit some of the programs in the College of Agriculture. ABE was one of two programs offering hands-on labs with the assistance of the ABE Ambassadors. 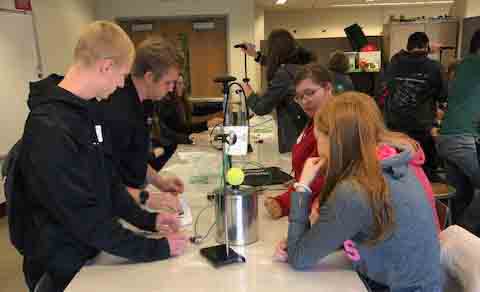 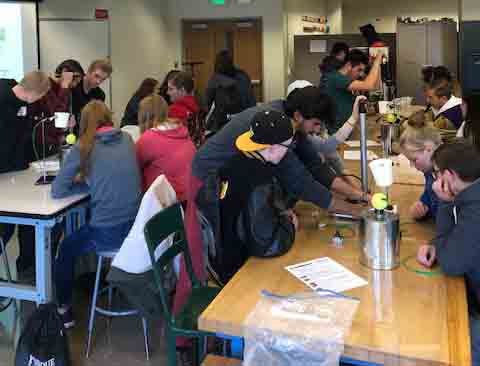 Nate Engelberth is a finalist for the Leah H. Jamieson Leadership Award at the 18th Annual College of Engineering Staff Awards. Good luck, Nate - we're pulling for you!

Each fall the Department of Agricultural & Biological Engineering hosts its annual Tractor Day at Throckmorton Purdue Agricultural Center, south of Lafayette.  This popular event is held in conjunction with labs associated with ASM 22200, The Fundamentals of Crop Production Systems.  Students physically review a variety of tractors of different configurations and then have the chance to operate some of the larger machines.  This year, the course instructor, Dr. Bob Stwalley, was assisted by ABE graduate student Paul Thieme in giving undergraduate students the opportunity to drive and maneuver modified four wheel drive tractors produced by John Deere and New Holland.  For many students, this is a first experience on a such a big machine.  The ability of our department to host hands-on practical experiences like this is critical to the production of the kinds of graduates so highly desired by industry. 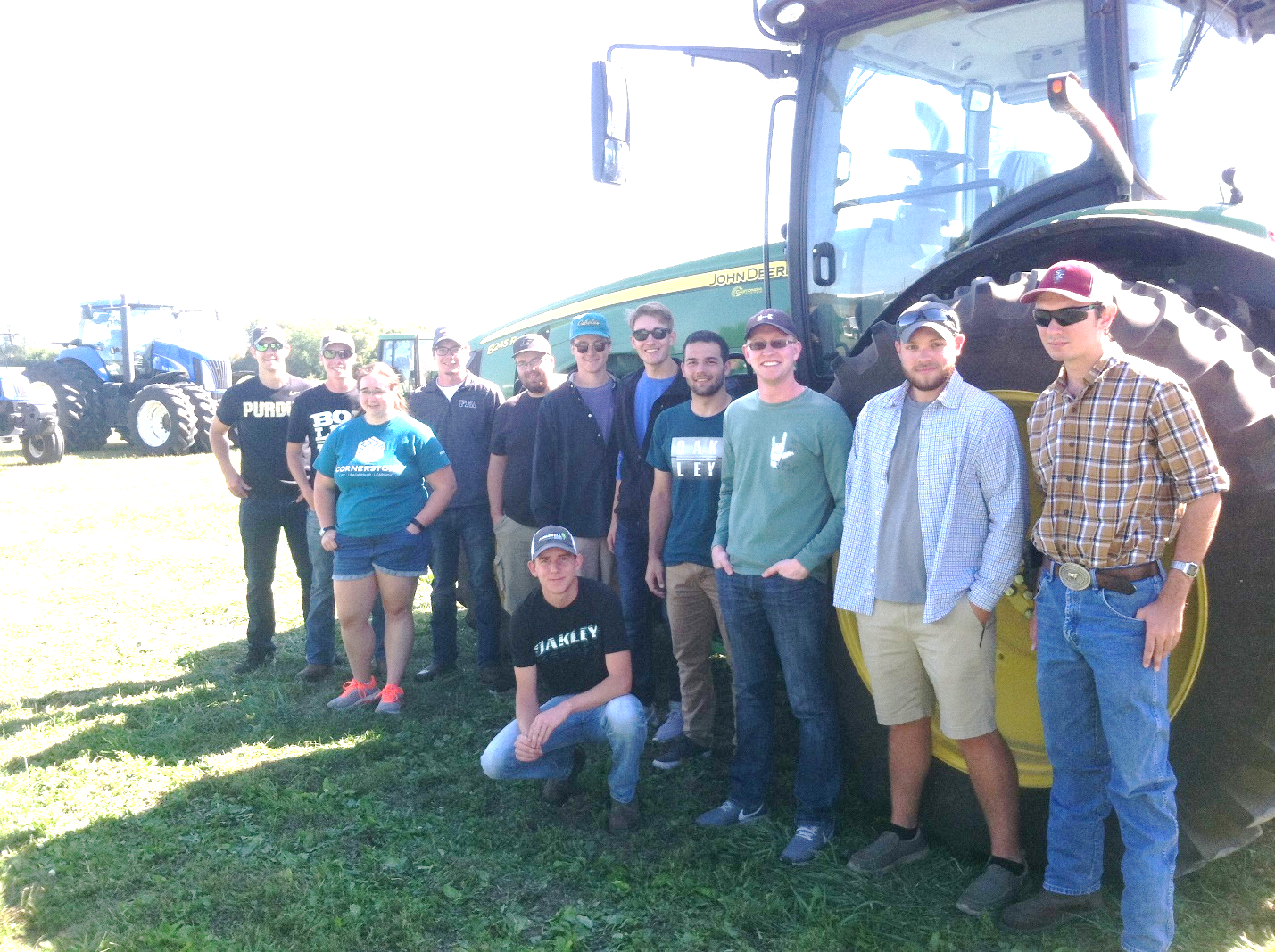 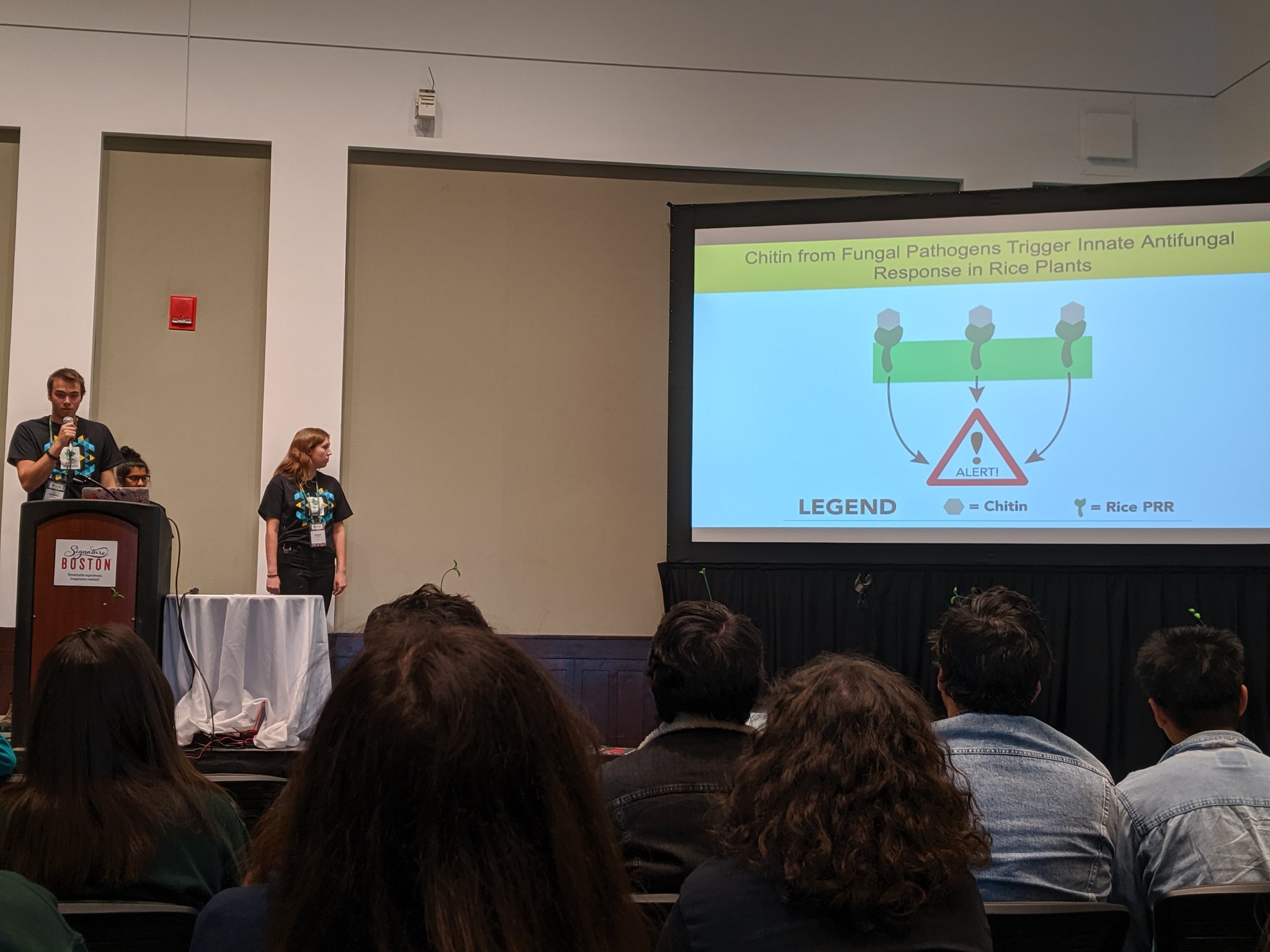 Congratulations to the Purdue International Genetically Engineered Machines (iGEM) Team for receiving a Bronze Medal at the annual Jamboree in Boston in October. The competition attracts more than 300 teams from across the world to develop engineering solutions for real-world problems with biology. This year, the team developed a ‘plant vaccine’ to increase rice crop immunity against rice blast fungus, which is responsible for more than 30% of rice yield losses annually. The team was advised by Drs. Kevin Solomon and Mohit Verma, with support from graduate instructors and BE graduate students  Ethan Hillman, and Suraj Mohan. Team members include BE students Sarah Liu, Ben Howard and Madhu Prakash. 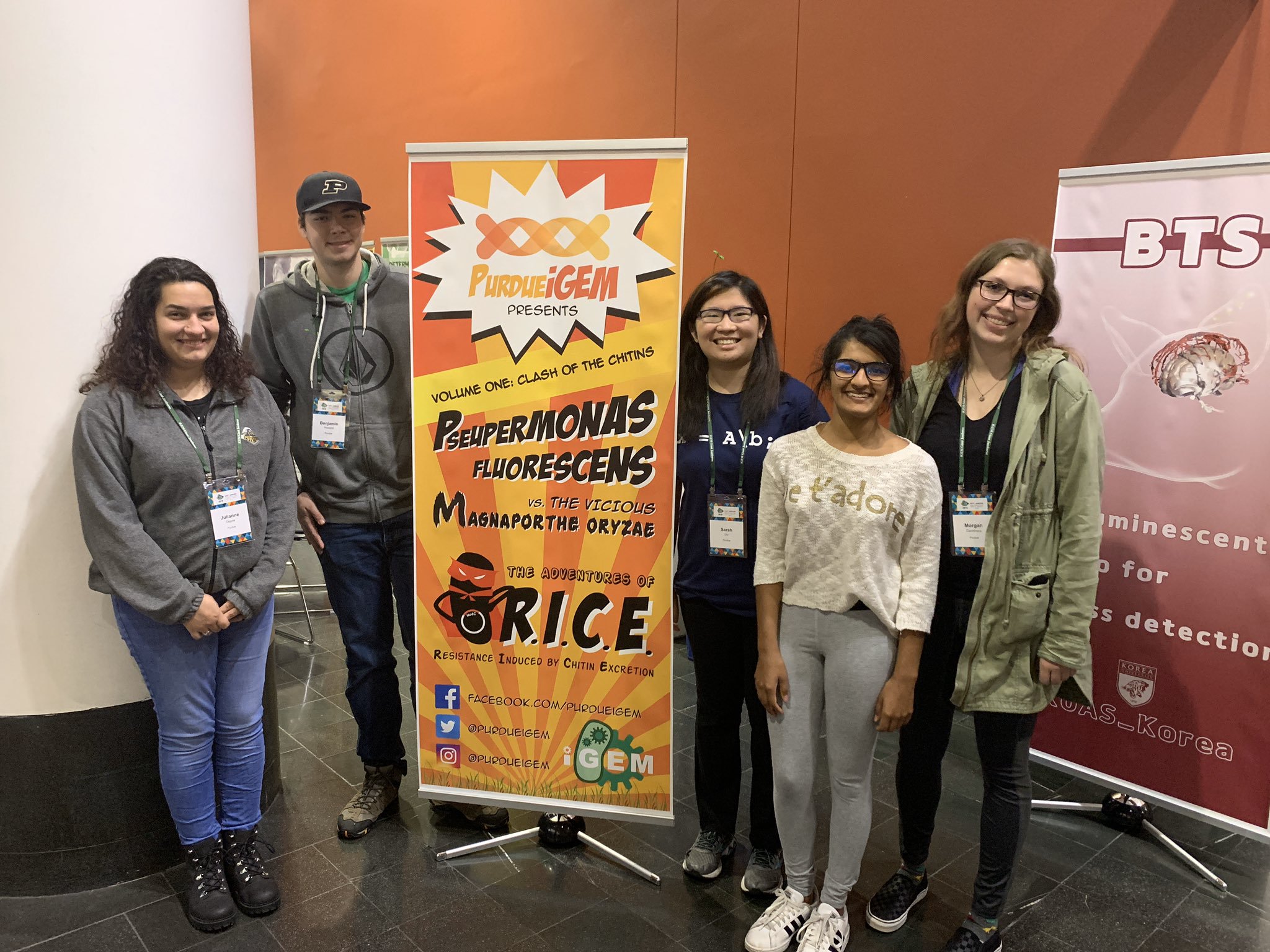