With projected increases in scope, complexity and duration of future space missions, both power and heat dissipation demands are expected to rise. Success of these missions will depend largely on the ability to reduce size and weight of all key thermal management sub-systems. One means to achieving this goal is to reduce surface area of heat exchange surfaces by replacing single-phase systems with two-phase counterparts, which can yield orders of magnitude enhancement in heat transfer coefficients. Small size and weight, minimal coolant inventory requirements, and ability to produce very high evaporation and condensation heat transfer coefficients, are all reasons why two-phase heat exchangers are expected to play a crucial role in future space mission.

Space missions span a range of gravities. Microgravity is important to the operation of satellites and Earth orbiting vehicles and stations. Future space missions will also demand strong understanding of the influence of Lunar and Martian gravities. On the other hand, thermal systems in fighter aircraft must be able to handle relatively large body forces. In the presence of any gravitational field, large density differences between liquid and vapor induce buoyancy effects. Therefore, magnitude of gravity can have significant influences on two-phase flow and heat transfer, especially critical heat flux (CHF). 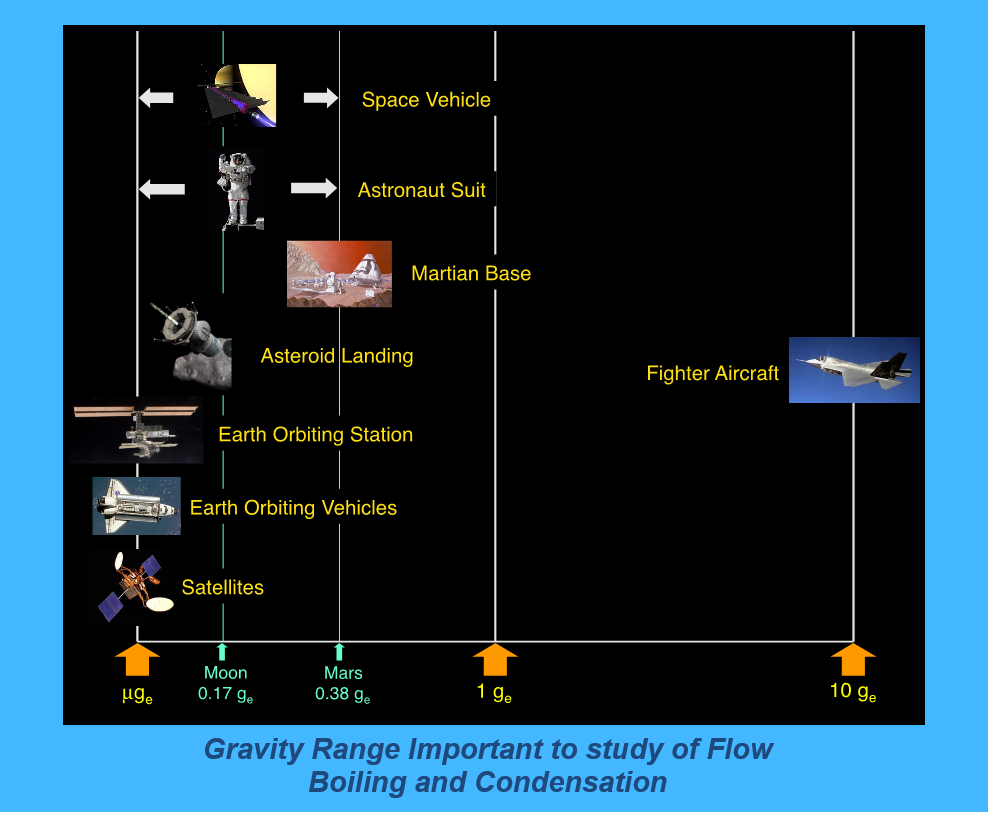 Our team has performed FC-72 flow boiling experiments in microgravity, Lunar gravity (0.16 ge), and Martian gravity (0.38 ge), conditions that were produced during parabolic maneuvers aboard NASA’s KC-135 turbojet and Zero-G Corporation’s Boeing 727-200. Vapor behavior was monitored along heated walls of a rectangular channel with the aid of a high-speed video camera. These experiments showed drastic differences in CHF data between Earth gravity and microgravity. While the effect of velocity on CHF in Earth gravity is relatively mild, CHF at low velocity in microgravity is only 50% that in Earth gravity. But the effects of buoyancy become negligible when velocity is increased to 1.5 m/s, at which CHF values for both gravities converge. This convergence has important practical implications to design of space thermal management systems since, by knowing the velocity at which such convergence occurs, designers may be able to utilize the vast body of knowledge amassed from celestial two-phase studies to design reduced gravity thermal management systems with confidence, provided flow velocity exceeds the convergent value. 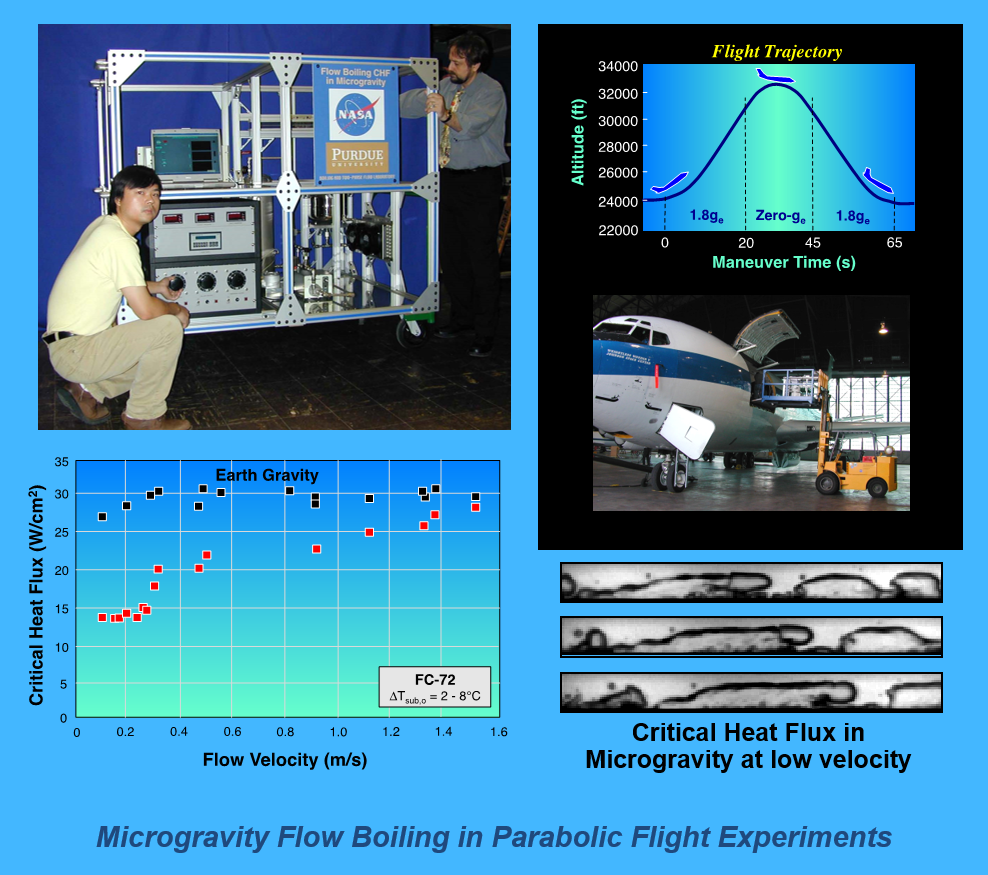 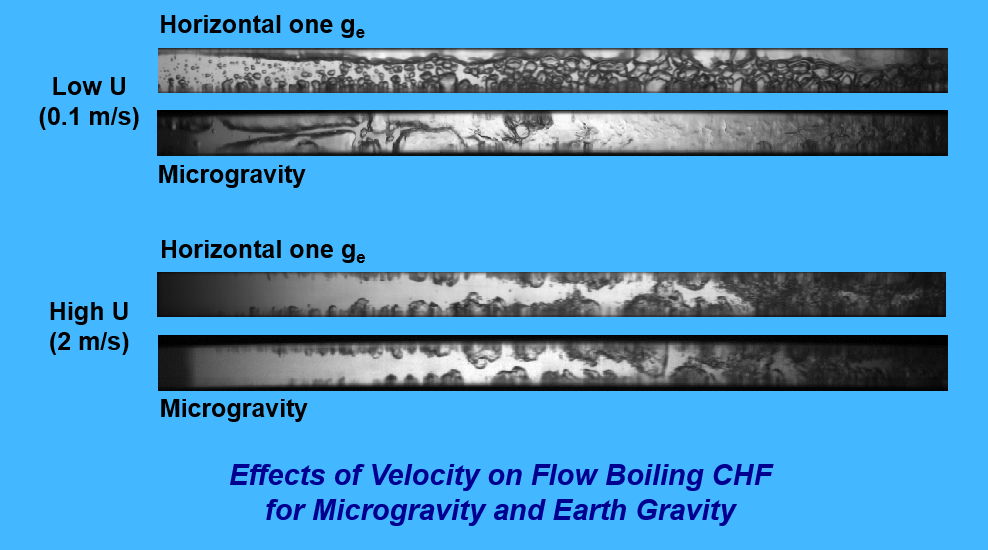 Prof. Mudawar presently serves as principal investigator for NASA’s Flow Boiling and Condensation Experiment (FBCE), a partnership between Purdue University and the NASA Glenn Research Center. FBCE is the largest phase change experiment to be conducted in space to date, and is scheduled for deployment in the International Space Station (ISS) in 2020. It is designed to accommodate three separate test modules: the Flow Boiling Module (FBM), the Condensation Module for Heat Transfer Measurements (CM-HT), and the Condensation Module for Flow Visualization (CM-FV), using n-Perfluorohexane (nPFH), C6F14, as working fluid. NASA’s future goal for FBCE is to serve as an integrated two-phase flow boiling and condensation facility for the ISS to meet the needs of the research community at large in obtaining microgravity two-phase flow and heat transfer data. Key objectives for the first set of experiments using the FBCE are to: 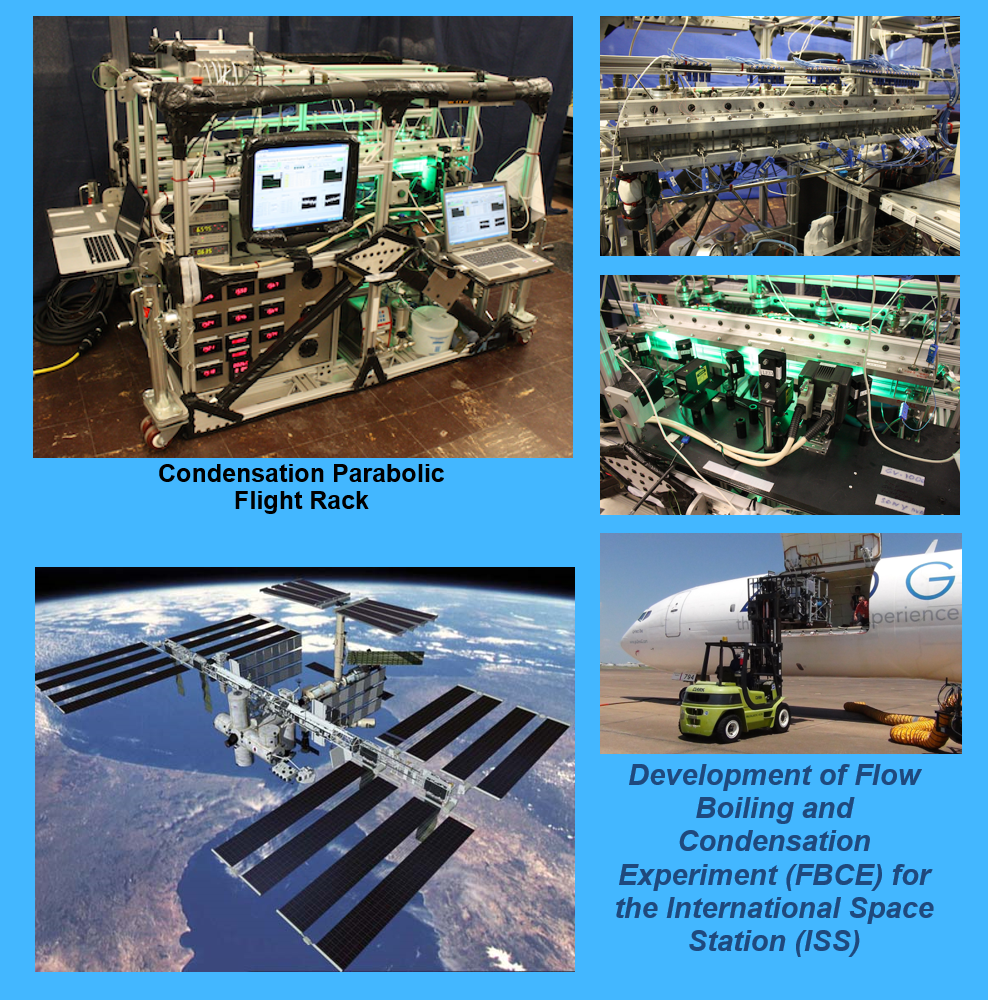 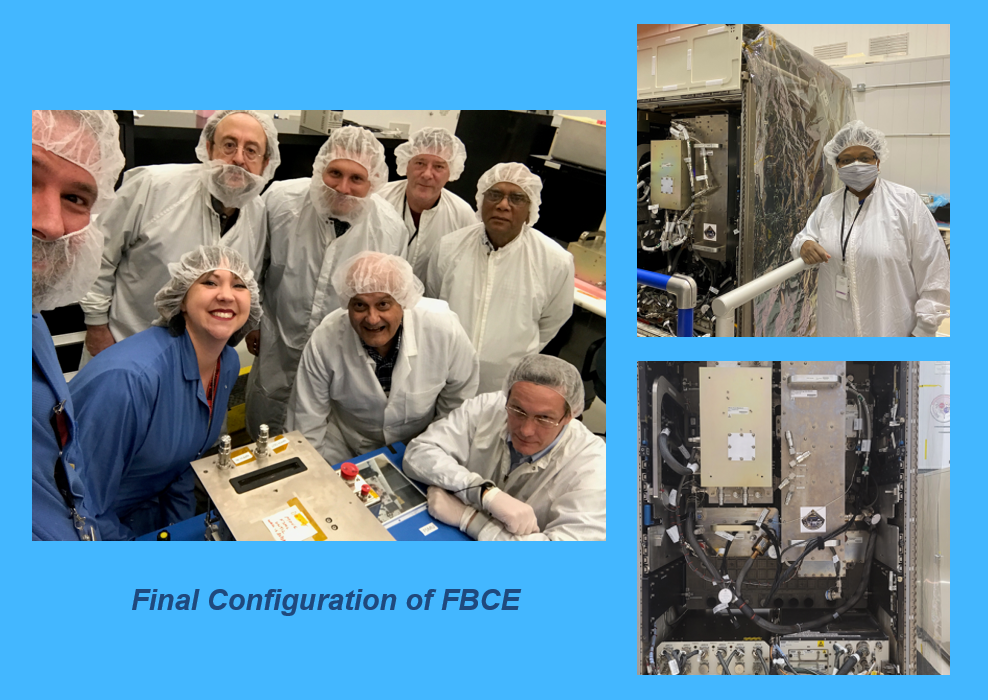 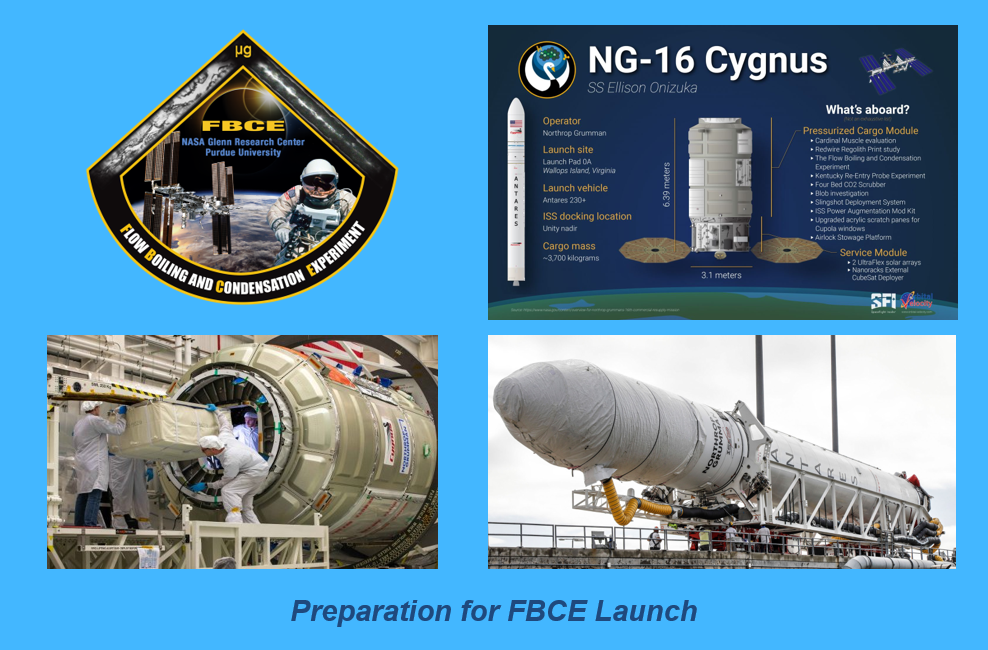 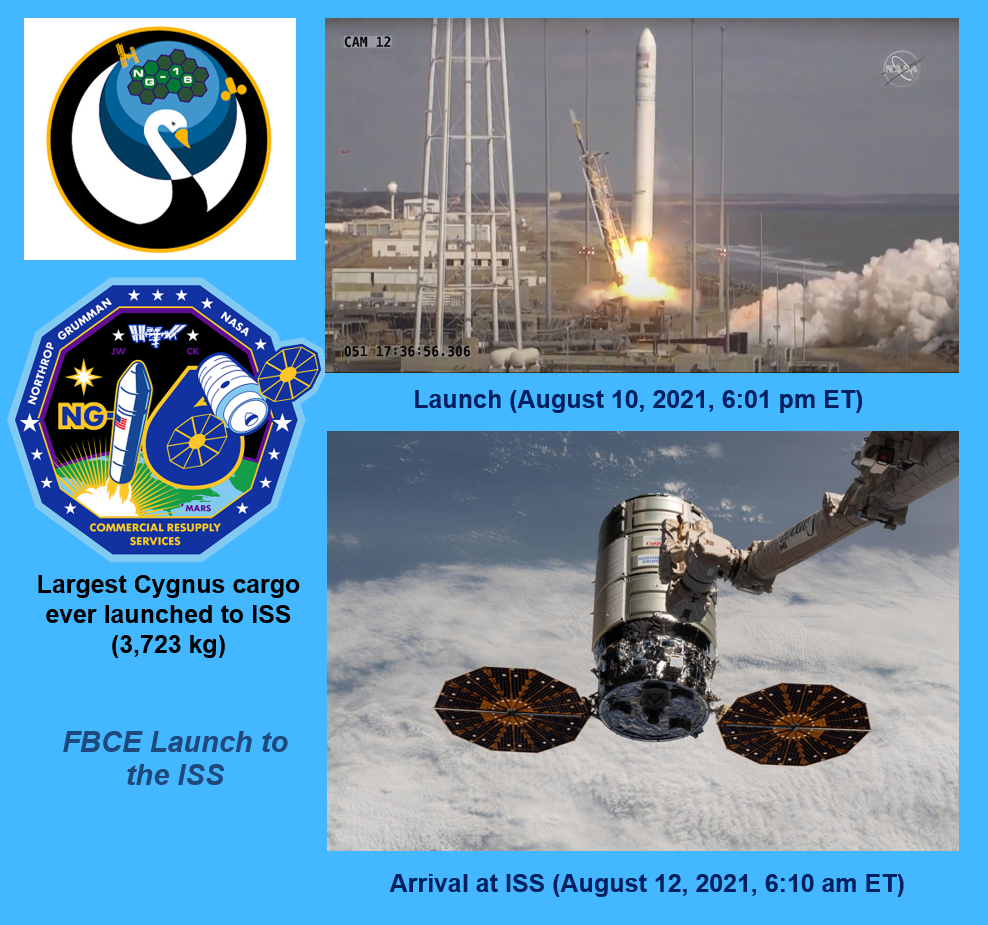